END_OF_DOCUMENT_TOKEN_TO_BE_REPLACED

[Theresa]  The course was an upper-division seminar that the syllabus noted as an “introduction to the history of medicine and a course in medieval paleography.” That is a lot to cram into ten weeks (Seattle University operates on a quarter system), but we were hopeful. We thought we could pull it off because we had no idea we couldn’t. Our idea made sense, at least it did in the early design phase.

In the fall, I jumped through the required administrative hoops, set aside funding from my endowed chair budget, and then sent out an email to all students who had at least a year of Latin inviting them to be part of a course like no other. Fifteen students replied, and ten eventually registered.

Here’s what they signed up for:

I would teach the first five weeks and then Monica would join us for the last five after graduation at Arizona State. The first part of the course focused broadly on the history of medicine in medieval Europe, with particular attention to the origins of medical knowledge and practice from the ancient Greek and Roman traditions. We started out with selected texts on Greek and Roman medicine in Faith Wallis’s Medieval Medicine: A Reader (University of Toronto Press, 2010). We warmed up some of the most influential recent studies on women’s medicine in the Middle Ages, particularly gynecology and childbirth. And then, heads first into the breach we did a close reading of Monica’s edition of the Trotula. Students studied the Latin alongside the English translation in order to prepare then for working with an untranscribed Latin text with medical terminology (for a complete syllabus, see the link on this site under Essential Reading). We then studied a bit of codicology and paleography using the wonderful book by Ray Clemens and Timothy Graham, Introduction to Manuscript Studies (Cornell University Press, 2007) as our guide. After the midterm, we began to transcribe and translate two archival manuscripts (available in digitized form) that discussed maternity, fertility, and infertility among noble and royal woman.

That was a colossal task. But the ten students in this seminar were exceptionally intelligent, unfailingly hard-working, and high-spirited. They simply dove into the material, knowing it was a once-in-a-lifetime class and trusting that Monica and I knew what we were doing. They cheerfully accepted all the ad hoc revisions to the syllabus. They were the key to the success of the course. Each of them brought some powerful skills and knowledge to the project: superb visual acuity (crucial to transcription), a solid command of Latin, ample coursework in history and philosophy and literary analysis. They could all easily hold their own in a graduate-level seminar.

Latin texts, and then writing a research paper that incorporated a formal description of the text and manuscript, a transcription and translation of a key passage, and an analysis and interpretation of the text.

I still get tired just thinking about this.

[Monica]:  What were we thinking indeed!  Our eyes were definitely bigger than our stomachs, but there was method in our madness.  I only mentioned one Latin text in my initial post, Pierre André’s The Golden Apple (Pomum aureum). But there was a second one that I’d known about for a couple of decades, also unstudied and also concerning the infertility of a royal couple.  This was Bernarde Chaussade’s Tractatus de conceptione et generatione praecipue filiorum, (Treatise on Conception and Generation, especially of Sons). Like Pierre’s work, Bernarde’s was precisely dated: 1488. 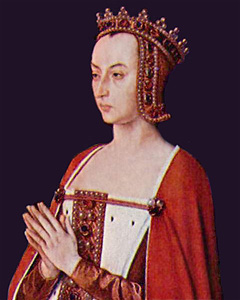 In 1488, Anne de Beaujeu (b. 1460, d. 1522), the dedicatee of Chaussade’s Treatise, was 28 years old.  She had been married for 14 years, yet, so far as we know, had never conceived.  Anne was the daughter of the French King Louis XI and Charlotte of Savoy. She was also the elder sister of King Charles VIII and served as regent for him from 1483 to 1491 and again in 1494. It was she who arranged his marriage to Anne of Brittany (January 25, 1477-January 9, 1514), thus allowing the final merger of that province into the Kingdom of France. Herself married at age 14 to Pierre of Beaujeu in 1474, she became Duchess of Bourbon when he acceded to the title of Duke of Bourbon in 1488. Chaussade’s reference to her in the text as “Duchess of Bourbon” thus confirms the text’s dating.

Despite the common circumstance of genesis, André and Chaussade’s texts had some intriguing differences. The sole extant copy of Chaussade’s text, Paris, Bibliothèque Nationale, MS lat. 7064, may have actually been the dedication copy, given its ornate opening pages and gold ink highlights. And while André was clearly interested in prescribing good practices for childbirth as well as care for the child in its first years, Chaussade was insistent on one goal:  producing a male heir. The chapters in the second part of the work all have this single agenda:  how the strength of the male and female seed contributes to the generation of males; what role the nature of the womb plays in “masculinization;” the ideal age of the parents for producing male children; the right times for conceiving males; and the ways in which the weather and environment contributed to the production of males.

The attraction, therefore, of doing both works at the same time was that, together, they presented such rich possibilities for comparison in examining how royal physicians addressed the urgent reproductive needs of their powerful clientele. Given that Chaussade may have even known about André’s treatise, it seemed a perfect match to plan to work on both texts at the same time.  Fortunately (for us), the French National Library wasn’t able to supply us with a reproduction of the Chaussade manuscript in time.  So we “settled” for just the Pomum Aureum alone.

And even that was a lot since, now faced with teaching the archival skills we had both honed and practiced for decades, we were reminded of something very basic:  reading medieval manuscripts is HARD WORK!

Postscript: Chaussade did not prove as “successful” as André with his work. Anne de Beaujeu bore only one child, her daughter Suzanne (b. 10 May 1491), while Leonor of Navarre and Gaston of Foix produced at last ten children, including four requisite males.

[Theresa]: And then, mirabile dictu, it worked out better than we could have imagined, even in our most optimistic dreams.

Queenship in the Middle Ages